We are often asked if we might change the name of our little feminist imitative — ‘zine, blog, and related live events — to something less inflammatory. “Hoochie,” we are told, smacks of the derogatory. “You can’t represent feminism with such an anti-woman name.”

Anti-woman? This is always a surprise, our founders took the title out of a fishing lure catalog, and didn’t have anything anti-woman in mind. Not wanting to be oblivious, however, we of the current writing and editing crew decided to look up the word in the dictionary.

Hoochie: a hut or lean-to. According to the OED, the word was used in the WWII-era armed services to refer to a temporary shelter or dwelling, especially one that is rattle-trap, insubstantial. Etymologists suppose the word comes from Japanese, in which language “uchi” means “dwelling.”

Huts aren’t anti-woman, though they have played a part in certain anti-woman cultural traditions. We kept looking, and there it was, lodged as entry 2 under the head-word. (Note to selves: contact the OED staff, ask why the feminine term is relegated to second class status.)

Hoochie, or more fully, hoochie mama: a young woman; especially one who is promiscuous or who dresses or behaves in a sexually provocative or overtly seductive manner. Example, from non-feminist rapper Big Daddy Kane: “‘Specially if the hoochie’s on birth control.”

The origin of the word is unclear, though it seems to be related to hoochie-koochie, a term in recorded use since at least 1890 to refer to a kind of erotic dance. Example: “They expected a theatre man to be brassy and leering, like a sideshow barker at a hoochie-koochie tent.” According to the Urban Dictionary, “Couchie is adapted from the French word coucher for “to go to bed” (like our word “couch”, which you can lie down on) … women who danced suggestively were ‘hootchie coutchie’ dancers … These women were not considered morally upright in the general public, so calling a woman a hootchie cooch was calling her a tramp, especially if she dressed in a way that is meant to be provocative.” (Yes, that’s the same French coucher as in the song that so audaciously portrays a woman intiating an intimate encounter. The daring! The nerve!)

Reall, now. Voulez-vous get something better to do than accuse us of woman-hating, when obviously we’ve got the best intentions in appropriating and rehabilitating (a great word — meaning, to dress in new clothes!) a term of anti-woman sentiment? We like the long “o” sound, we like the tschuss-tschuss, we think highly of our diminutive and easy-to-rhyme-with -ie ending, and are pretty happy all around being called Hoochies.

We won’t be changing the name to anything safer, thank you. Besides, all the good, wholesome, safe names are already taken.

But perhaps we’ll consider going in a more risque direction, since that seems to be what our readers want…

Here’s a look at the latest search terms that have brought readers to our blog. 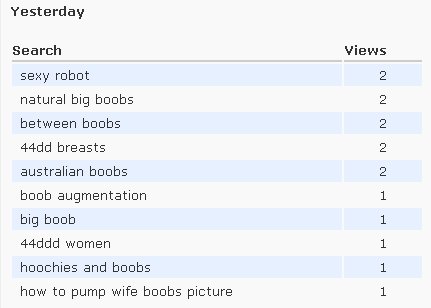 With these numbers, how could Boobie Magazine fail to be a hit? Plus, we can guess, we’d attract attention from just the sort of people who might benefit from a challenging feminist perspective.